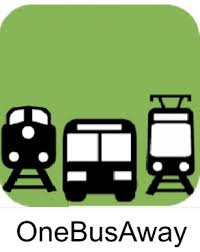 UW CSE Ph.D. alum Brian Ferris and Ph.D. student Caitlin Bonnar take two of the region’s transit agencies to task in an op-ed in the Seattle Transit Blog for ongoing issues with the quality of the data they provide to OneBusAway, the Transit App, Google, and other transit information sources.  (Brian wrote all the original code for OneBusAway, and Caitlin currently coordinates maintenance and development of the iPhone app.)  Read it here, along with numerous comments from other riders. 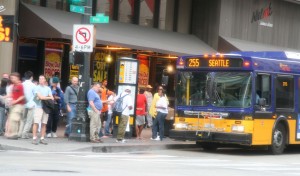 “It’s a daily routine for many transit riders in the Seattle area: Pull out your smartphone, check the OneBusAway app, then decide whether you need to sprint to the bus stop or can afford that last sip of coffee. The application, developed at the University of Washington, uses real-time data to track when your bus is actually going to arrive.

“But for many blind and low-vision riders, knowing when the bus will arrive isn’t always enough. Crucial information like where the stop is in relation to the intersection and whether there is a shelter or bench sometimes can make the difference between an independent commute and a frustrating experience.

“UW computer scientists have created a program called StopInfo that integrates with OneBusAway and provides specific information on location, safety features and stop closures for each bus stop in King County. In particular, it seeks to collect and share information that blind people have identified as important when they ride the bus. It relies on bus riders using the OneBusAway application to update and provide information about each stop.” Rep. Suzan DelBene attacks patent trolls on the floor of the US House of Representatives, using as her example Arrival Star’s lawsuit against King County Metro and a number of other transit agencies alleging infringement of an overly-broad and unpracticed patent by public transit apps including UW CSE’s widely-used and widely-emulated OneBusAway. UW CSE’s OneBusAway continues to expand.  A transit rider in any of the OneBusAway regions (currently Atlanta, Puget Sound, and Tampa – and growing) can download the OneBusAway app for iPhone, Android, or Windows Mobile, which will then automatically detect which region it’s in, connect to the server for that region, and seamlessly start serving transit data.  Read the blog post here.
September 28, 2013 UW CSE’s OneBusAway transit app goes national! Tampa (and several other cities) are rolling it out with great fanfare and commitment! OneBusAway began as a student project at the University of Washington.  It became so widely used by transit commuters that after the students graduated, three area agencies (King County Metro, Sound Transit, and Pierce Transit) contracted with the University of Washington to continue running the service. There are now over 100,000 users per week in Puget Sound.  At the same time, instances of OneBusAway have been brought up in other regions, including Atlanta, Detroit, and Tampa; the OneBusAway Enterprise system (derived from the core OneBusAway) is the basis for the BusTime system in the greater New York region.

In mid-May, Sound Transit will be taking over running it.  (Sound Transit already has an experimental version of OneBusAway running in parallel with the production system.)  We hope that the transition will be relatively seamless. OneBusAway, the popular real-time transit information system in the Puget Sound region developed by UW CSE, has gone national, with deployments in New York City and Detroit, along with experimental deployments in Tampa, Atlanta, and Washington DC.

In New York, MTA is using OneBusAway as the basis for its Bus Time service.  In Detroit, a CodeForAmerica team used it for a text-messaging system, TextMyBus.

But you live in the Puget Sound region – use the original OneBusAway here.

(Brian Ferris, the CSE Ph.D. student who contributed greatly to OneBusAway, now works for Google, which one of these years will roll out a similar service.  But we will crush them like a bug.)

OneBusAway has a friend in Zurich Bus riders in the greater Seattle area rely on OneBusAway, using it more than 50,000 times a week.  OneBusAway was created by UW CSE Ph.D. student Brian Ferris, who graduated this past summer and now works for Google in Zurich.  Ferris built and ran One Bus Away, a collection of phone apps that inform riders when buses are expected to arrive at their stop, using data shared by transit agencies.

UW CSE has continued to run the system since Brian’s graduation.  However, earlier this month, King County Metro did a major restructuring of its network that caused glitches to OneBusAway.  Since it wasn’t clear which agency would pick up the tab for these changes, Brian updated the system himself.

QUICK UPDATE:  On October 12th, the Puget Sound transit agencies announced that an agreement had been reached to keep OneBusAway running. UW CSE’s Brian Ferris, the brains and brawn behind the OneBusAway transit application, may have received his Ph.D. and left for Google Zurich where the trams run like a Swiss watch … but OBA remains behind, continuing to garner awards – this time from the Puget Sound Regional Council.

PSRC’s VISION 2040 Award “recognizes innovative projects and programs that help ensure a sustainable future as the region grows.”  Said Mukilteo Councilmember Jennifer Gregerson, Chair of the VISION 2040 Awards Selection Committee, “Access to real time information in a variety of mobile formats has taken some of the uncertainty out of using transit, making it an even more convenient way to get around.”