We hold alumni events annually at the companies in Seattle and the Bay Area that employ significant numbers of our alums. On August 12 we were at Google’s Kirkland WA engineering office; on August 13 we were at Google’s Seattle engineering office. Google has close to 2,000 engineers in these offices, growing to 3,000 – including lots of our alums. It’s great to re-connect!

Another recent post related to UW CSE alums at Google is here. 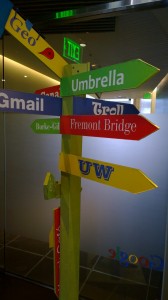