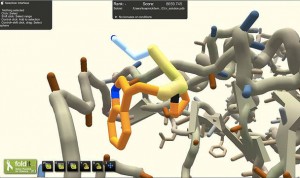 “Months before the recent Ebola outbreak erupted in Western Africa, killing more than a thousand people, scientists at the University of Washington’s Institute for Protein Design were looking for a way to stop the deadly virus.

“For inspiration, they turned to an unlikely source: gamers.

“Specifically, they asked thousands of computer-game enthusiasts worldwide to tackle an Ebola puzzle on the interactive game Foldit, a 6-year-old project that encourages people to solve puzzles for science.”

Foldit is a collaboration between UW CSE’s Center for Game Science and the Institute for Protein Design. One of many notable successes occurred several years ago, when Foldit gamers solved an AIDS-related protein structure problem that had baffled the scientific community for a decade.

The Seattle Times article is fascinating – read it here. Learn more about the Center for Game Science here.