UW pioneers a wireless device powered by changes in temperature 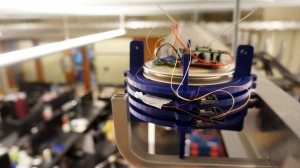 “A centuries-old clock built for a king is the inspiration for a group of computer scientists and electrical engineers who hope to harvest power from the air.

“The clock, powered by changes in temperature and atmospheric pressure, was invented in the early 17th century by a Dutch builder. Three centuries later, Swiss engineer Jean Leon Reutter built on that idea and created the Atmos mechanical clock that can run for years without needing to be wound manually.

“Now, University of Washington researchers have taken inspiration from the clock’s design and created a power harvester that uses natural fluctuations in temperature and pressure as its power source. The device harvests energy in any location where these temperature changes naturally occur, powering sensors that can check for water leaks or structural deficiencies in hard-to-reach places and alerting users by sending out a wireless signal.”