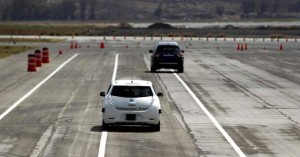 “Reports over the weekend that Tesla could be the latest carmaker to add autonomous features to its products is being greeted with excitement, but experts remain concerned that the new industry technology could be susceptible to sinister cybercriminal activity …

“Analysts are keen to point out an academic paper dating from back in 2011 when researchers from the University of Washington and the University of California-San Diego were able to wirelessly hack into cars. This led to the auto industry ‘waking up’ to the security threat, according to Juliussen, who adds that auto manufacturers and their suppliers are now doing research and acquiring expertise.

“‘It will take several years until the results show up in the cars,’ he said.”

Be afraid!  Be very afraid!  Read more here.  Learn about the research here.