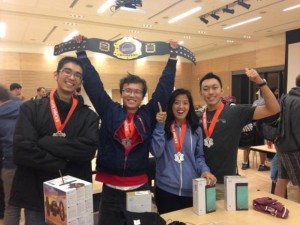 “Nearly 400 students from the Pacific Northwest and beyond took over the third floor of the University of Washington’s Husky Union Building for the first-ever DubHacks, a 24-hour collegiate hackathon and the first of its kind in the region for college students …

“Angelica Cupat, Gantulga Balgan, Kevin Liang and Patrick Chiang didn’t know each other before forming a team and taking home the hackathon’s largest prize – cash, software, hardware and an opportunity to compete in Facebook’s upcoming hackathon.

“The four UW students created LimeLight, a speed-reading app for news articles that allows the average user to read as much as five times faster, they say.”