UW CSE’s Richard Ladner in GeekWire: “How tech advances are helping innovators do more for people with disabilities” 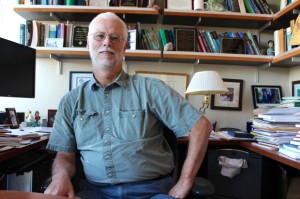 “Inside a small office on the sixth floor of the University of Washington’s computer science building, Richard Ladner starts talking about Google’s self-driving cars. The longtime professor is so excited about the innovation that he lets out a big laugh.

“But Ladner isn’t joking around – rather, he’s jazzed up about a better future for people with disabilities.”