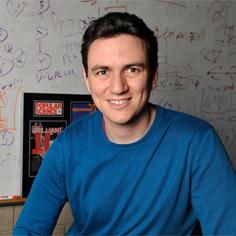 “Carlos Guestrin wants to bring big data and machine learning to the masses.

“Guestrin, the CEO and co-founder of GraphLab, is the Amazon Professor of Machine Learning in Computer Science & Engineering at the University of Washington. He’s a leader in the field of machine learning, who was named one of the 2008 “Brilliant 10″ by Popular Science magazine, received the 2009 IJCAI Computers and Thought Award for his contributions to Artificial Intelligence, and was awarded a Presidential Early Career Award for Scientists and Engineers.

“Meet our new ‘Geek of the Week,’ and continue reading for his answers to our questionnaire.”