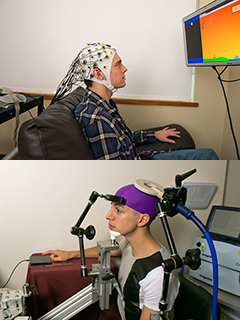 Last summer, an interdisciplinary team of UW researchers became the first to demonstrate two human brains communicating directly without using language. Today, having completed a more comprehensive test of its brain-to-brain interface, the team published its results in the journal PLOS ONE. UW CSE professor Raj Rao is lead author of the study.

The researchers used a combination of non-invasive instruments and software to connect two human brains over the Internet in real time. Six participants were paired off, with one designated as sender and one as receiver, and placed in separate locations on campus. Each member of the pair was unable to communicate with the other except by the link between their brains as they cooperated remotely to execute a command in a computer game. The researchers transmitted signals from one person’s brain to the other, using them to control the hand motions of the recipient – successfully replicating the results of the initial demonstration.

In addition to measuring the accuracy of their communication, researchers were able to quantify the amount of information transmitted between participants. Thanks to a new $1 million grant from the W.M. Keck Foundation, the team will be able to take its work a step further: in the next round, the researchers will increase the complexity of information transmitted between brains.

Rao, undergraduate CSE researcher Joseph Wu, and CSE alumnus Matthew Bryan co-authored the study with Andrea Stocco and Chantel Prat of the UW Institute for Learning & Brain Sciences and Devapratim Sarma and Tiffany Youngquist of the UW Department of Bioengineering.

Published by Kristin Osborne on November 5, 2014