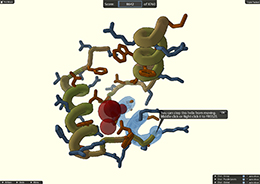 Brian Koepnik and Vikram Mulligan – two of the scientists behind FoldIt, the award-winning protein-folding game developed by members of UW CSE’s Center for Game Science and the UW Department of Biochemistry – will be at the Pacific Science Center this Friday through Sunday to help celebrate Life Sciences Research Weekend.

FoldIt is an online game that has effectively crowd-sourced scientific discovery of the 3-D structure of proteins that play a role in diseases such as cancer, AIDS, and Ebola. Players are presented with a model of a protein to fold using a selection of tools. The game then evaluates the fold and uploads each player’s score to a leaderboard.

FoldIt has grown into a robust online community, and the competition sometimes can get fierce. This competitive streak yielded results in 2011 when FoldIt players discovered the protein structure of an AIDS-like virus. The virus had stumped scientists for a decade, but the FoldIt community unlocked its structure in just three weeks. More than 100,000 people around the world have played the game since it was released in 2008, and the game recently reached 1,000 puzzles.

Life Sciences Research Weekend is a three-day event November 7-9 at the Pacific Science Center in Seattle. The FoldIt team is taking part in a robust program of live demonstrations and interactive exhibits designed to engage families and citizen scientists in learning more about the role of life sciences research in our daily lives. Help spread the word, and stop by to say hi!

Learn more about the Center for Game Science here, and try your hand at protein folding here. Find directions to the Pacific Science Center to join in the fun this weekend here.

Published by Kristin Osborne on November 6, 2014