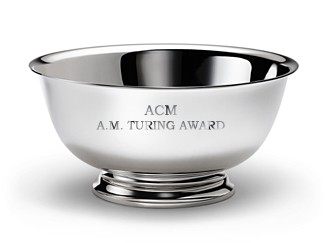 “The A.M. Turing Award is often called the Nobel Prize of computer science. Now, thanks to Google’s largess, it will be a Nobel-level prize financially: $1 million.

“The quadrupling of the prize money, announced on Thursday by the Association for Computing Machinery, the professional organization that administers the award, is intended to elevate the prominence and recognition of computer science. The move can be seen as another sign of the boom times in technology.

“Computing is increasingly an ingredient in every field, from biology to business. College students, encouraged by their parents, are rushing to take computer science courses. It’s not just a skill but a mind-set. Computational thinking is the future, where the excitement and money is. Quants rule …

“For Google, being the deep-pocketed benefactor of the Turing Award is both good branding and a public statement that it takes fundamental research seriously.

“‘Computing is our lifeblood,’ [Stuart Feldman, vice president for engineering at Google] said. The company, he added, hopes that increasing the prize money will give greater public prominence and recognition to the importance of computer science.”