Euronews recently featured an article on SideSwipe, a new sensor technology developed by Chen Zhao and Matt Reynolds that enables smartphones to recognize hand gestures. As Matt Reynolds explains in the article:

“‘If you think about a radar on an aircraft or a boat or something like that … you have a transmitter that is sending energy out into the environment and it is being reflected by objects nearby … what we do is use a machine learning algorithm to match patterns of the changes due to gestures with previously recorded patterns and when we see a match we say ‘oh’ a particular gesture has been performed.’” 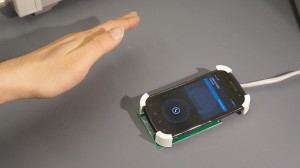 Having demonstrated that its sensor works with 87 percent accuracy, the team is working on commercializing the new technology.

Read the article here, and check out the original media release announcing the technology here.

Published by Kristin Osborne on November 25, 2014