Department chair Hank Levy traveled to our state capital today at the invitation of the House Higher Education Committee to address the growing demand for computer science graduates in Washington and the role of UW CSE in meeting that demand. 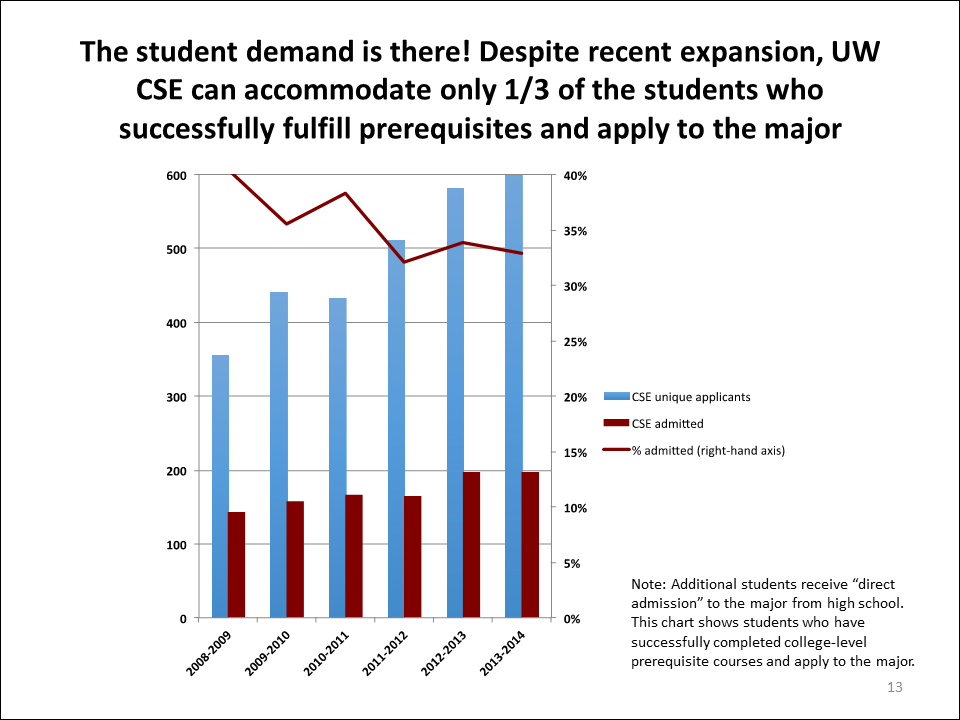 Speaking before the committee, Hank emphasized the role that UW CSE plays in supplying top computer science graduates to large information and communication technology (ICT) employers such as Microsoft, Amazon, and Google; local startups that do not have the resources to recruit on a global scale; and companies outside of the ICT sector that employ significant numbers of technical talent. He also shared data on student demand, noting the sharp increase in the number of incoming UW students who signal their intent to major in CSE – more than any other field of engineering – and his expectation that enrollment in CSE’s introductory courses will exceed 5,000 students this year.

“We have become, with your support, one of the very top computer science programs in the nation,” Hank told the committee.

Highlighting Bureau of Labor Statistics data showing that the Puget Sound region is “the software capital of America,” with more developers here than can be found in Silicon Valley, Hank shared state and national data illustrating how future demand for computer science graduates will outstrip that of other STEM fields. Meeting this need, he said, is critical to Washington’s economy; with additional state support, UW CSE would be able to double degree production from 300 to 600 per year.

“The state will always be a net importer of talent – that is just inherent in the exciting and incredible growth of Washington,” Hank observed at the conclusion of his testimony. “But students here who have the ability and desire to prepare for these top jobs need to have the opportunity to do that, and our goal is to give them that opportunity.”

Other presenters included Michael Schutzler, CEO of the Washington Technology Industry Association; Microsoft recruiter Becky Tucker; and Lysandra Donigian, Google’s Manager of Technical Student Outreach for North America. All of them pointed to UW CSE as a vital producer of sought-after talent for Washington’s high tech employers and advised the committee to make the program’s expansion a high priority.

Download a PDF of Hank’s presentation to the committee here.

Watch a video of the work session, courtesy of TV-W, here.

Published by Kristin Osborne on January 20, 2015