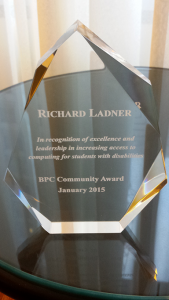 UW CSE professor Richard Ladner has been honored with the 2015 Broadening Participation in Computing (BPC) Community Award “in recognition of excellence and leadership in increasing access to computing for students with disabilities.”

Richard accepted the award at the STEM-CP: Computing Education for the 21st Century (CE21) PI Meeting in Baltimore, Maryland, where he delivered a keynote address titled “Accessibility Is Not Enough.” The purpose of the CE21 meeting is to build community around the efforts of the National Science Foundation’s Directorate for Computer & Information Science & Engineering (CISE) to broaden participation in computing and strengthen computer science education.

Richard has devoted more than a decade to accessibility research and has been a strong advocate for broadening participation in computing and using technology to enrich the lives of people with disabilities. Read more about his work in this excellent GeekWire article.

Congratulations to Richard on this well-deserved recognition!