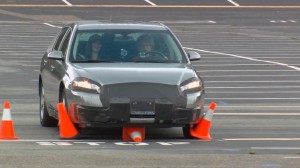 Last night, 60 Minutes broadcast a segment called “DARPA Dan” in which Dan Kaufman, head of the agency’s Information Innovation Office, described the various ways DARPA is supporting research on cybersecurity and the Internet of Things. In one of the more dramatic demonstrations during the broadcast, Dan and UW CSE alum Karl Koscher hack into a car driven by 60 Minutes correspondent Lesley Stahl (with DARPA PM Kathleen Fisher riding shotgun). View the segment here – the car hacking demo begins at minute 6:40, and Yoshi and his team appear at 9:37.

The broadcast foreshadowed today’s release of a report by Senator Edward Markey (D-Mass.) on car hacking. Some of the media coverage refers to the 60 Minutes demonstration, which took place on the UW campus and was based on the work of UW CSE’s Yoshi Kohno and his students, in collaboration with colleagues at the University of California, San Diego.

Read more about today’s coverage here, here, and here, and delve into the history of UW and UCSD’s car hacking research, courtesy of The New York Times, here and here.

Read our previous blog post on this topic here.

Published by Kristin Osborne on February 9, 2015