Live outside of your comfort zone: UW CSE alum Mohamed El-Zohairy shares lessons learned as a student, an entrepreneur and an activist 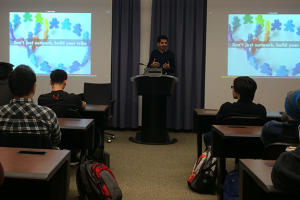 UW CSE alumni may be revolutionary in technology terms, but Mohamed El-Zohairy (BS, ’07) took it to a new level when he joined the political revolution in his home nation of Egypt. Yesterday, Mohamed returned to the Allen Center to share his experiences with a group of undergraduates as part of CSE’s Leadership Seminar Series.

Mohamed opened his talk by urging students to “live outside of your comfort zone” – words he certainly lived by during his unconventional journey from high school student in Egypt captivated by UW CSE’s robotic soccer dogs, to UW CSE graduate, startup founder, and director of product engineering at News Corp.

Mohamed was in graduate school at the University of British Columbia when the protests against the government of President Hosni Mubarak began in early 2011. He took a leave of absence from his studies to join his compatriots in Tahrir Square – but not before reaching out to TechCrunch to alert the Western media about the Internet blackout instigated by Egypt’s government in response to the protests.

After the revolution, Mohamed remained in Egypt, where he was joined by fellow UW CSE alums Allen Chen and Bobby Mathews in building the content creation platform CloudPress. One year later, News Corp. acquired CloudPress – and with it, the team. Mohamed then departed Egypt for New York to join News Corp. to help build the company’s mobile publishing platform.

Even with all he has experienced after CSE, Mohamed made sure to share practical advice to help students make the most of their time in the department. Among his pearls of wisdom: “If you procrastinate, do it right!” and, “Know your most productive time of day.” And, drawing from his entrepreneurial heritage, he urged them to not be afraid of failing, because “failing doesn’t make you a failure.”

Read the TechCrunch article on the Egyptian revolution and Mohamed’s role in bringing the government’s Internet shutdown to the attention of the media here.

Read about News Corp.’s acquisition of CloudPress on TechCrunch here and on GeekWire here.

Published by Kristin Osborne on February 18, 2015