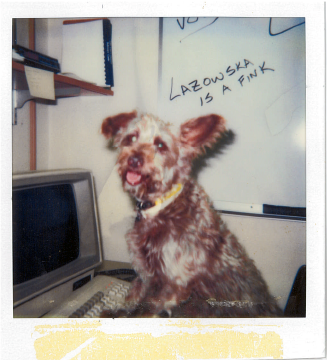 A famous historical UW CSE photo, lost for over 25 years, has been located in North Carolina. This photo, of CSE graduate student Monkey W. Duncan (ABD ‘89), graced the grad student photo board on the lower level of Sieg Hall (CSE’s home prior to the Allen Center) in the late 1980s. The photo also shows the advanced technology that was available to CSE graduate students at that time.

Unfortunately, Mr. Duncan never completed the program, as the Ph.D. quals in the 80s required students to pass a long written exam, and he was unable to hold a pencil. He did pass the oral theory exam, however, correctly responding to the question about whether P equals NP with a series of barks. After failing the quals he ran into legal troubles, and Prof. Hank Levy had to provide a character witness to a Seattle judge when Mr. Duncan was charged by the Seattle police for “walking without a leash.” He eventually relocated to Chapel Hill, NC, along with his office mate Kevin Jeffay, now Chair of UNC’s Department of Computer Science.