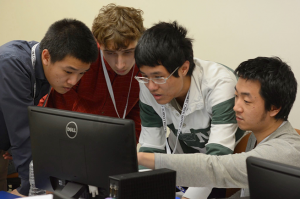 We’re celebrating our own version of March Madness after Team Hillarious*, a group of students from UW CSE, captured second place at the Pacific Rim Collegiate Cyber Defense Competition (PRCCDC) over the weekend. PRCCDC is an annual competition that serves as the regional semi-finals for the National Collegiate Cyber Defense Competition, a.k.a. the “big dance of data defense.” Teams of college students from Washington, Oregon and Idaho do battle against teams of hackers composed of cybersecurity industry experts who volunteer their time to test the students’ mettle. Fourteen teams participated in this year’s regional competition, which took place at Highline College.

*If you are wondering if that is a typo, it isn’t. Team Hillarious got its name when, a few years ago, the UW students frustrated a team of hackers with their defensive prowess. In response, the hackers left a note on the door that said, “You think you’re so hillarious, don’t you?” We thought that was hilarious, and so the name stuck.