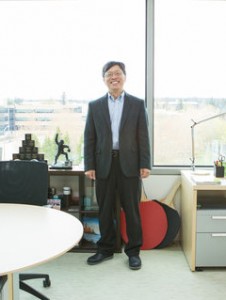 “A big part of Microsoft’s fate rests with its research arm, the quasi-academic group responsible for conjuring breakthroughs that will keep Microsoft relevant for generations to come.

“On Monday, Harry Shum, the Microsoft executive vice president who oversees the research operation, was bursting with pride while demonstrating Skype Translator, a new product that incorporates years of work by researchers to convert voice conversations from one language to another in real time …

“Breaking down barriers at Microsoft is still a work in progress, but some executives said the tone had changed markedly. ‘Skype had every reason to push back,’ said Peter Lee, a corporate vice president at Microsoft Research. ‘But instead Gurdeep, especially, just embraced this.’

“‘There’s an eagerness in the business units to pick up ideas that are going to make a significant difference,’ said Ed Lazowska, a professor of computer science at the University of Washington, who is on the technical advisory board for Microsoft Research.”