The Wall Street Journal on Artificial Intelligence and UW CSE 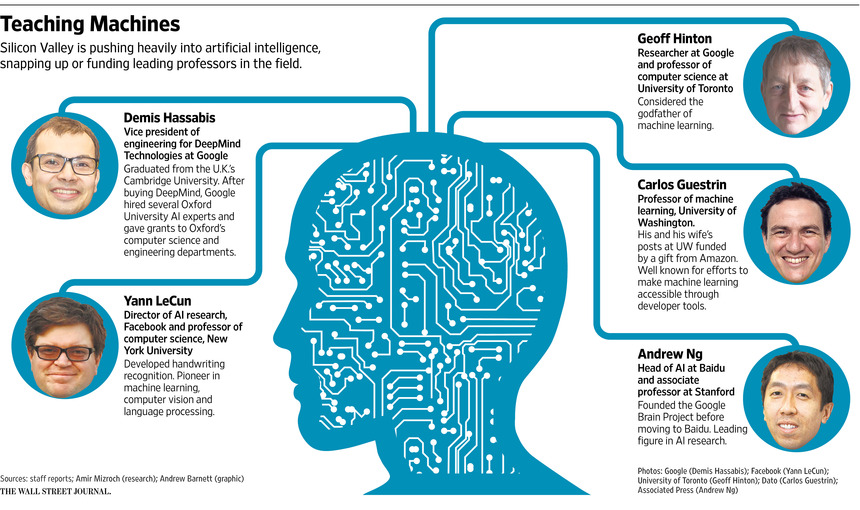 UW CSE is heavily featured in this Wall Street Journal article on AI:

“When the University of Washington’s computer-science department wanted to poach artificial-intelligence expert Carlos Guestrin from Carnegie Mellon, it turned to Amazon.com Inc.

“The Seattle-based tech giant ponied up $2 million to fund two professorships: one for Mr. Guestrin, and another for his wife, who also works in the field. To seal the deal, Amazon Chief Executive Jeff Bezos met the academic during a campus visit.

“‘[Mr. Bezos] is a very smart guy. He has a crazy laugh,’ said Mr. Guestrin, now UW’s Amazon Professor of Machine Learning. ‘We got quickly into technical things: What was I working on in large-scale machine learning? How could I impact Amazon? What could this mean for the business of data?’ …

“Tech companies also are pouring funds into universities with expertise in the once-obscure field. University of Washington, based in the same state as Microsoft Corp. and Amazon, has long been a center of excellence for computer science, including artificial intelligence. Microsoft, Intel Corp. and Google, as well as Amazon, all fund some of UW’s AI research …

“‘There’s a massive battle under way for talent,’ said Oren Etzioni, on leave from UW’s computer-science faculty and now heading up the Seattle-based Allen Institute for Artificial Intelligence, a nonprofit set up by Microsoft co-founder Paul Allen.”