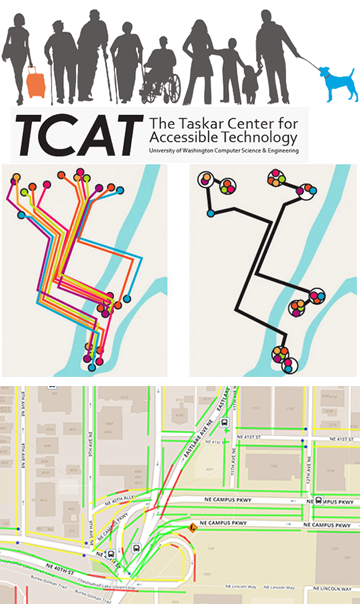 UW CSE’s Taskar Center for Accessible Technology (TCAT) announced today that two of its projects were selected to participate in the eScience Institute‘s Data Science Incubation Program this summer focusing on Data Science for Social Good. Both TCAT projects address commuting and transportation needs in King County, with an emphasis on enhancing access for individuals with mobility impairments.

The first project, ParaTransit To Go, is a collaboration between TCAT and King County Metro Transit’s Accessible Services group to improve and optimize paratransit services, a demand-responsive mode of public transportation in which passengers are picked up at or near their doorstep and delivered to their specified destination. The second project, Access Map, was created by a team of students as part of the City of Seattle’s Hack the Commute competition under the guidance of TCAT director Anat Caspi and CSE professor Alan Borning. After Access Map captured first place in the civic competition, TCAT continued to support the effort and solicited the help of the eScience Institute to advance the data science end of development.

“Part of TCAT’s mission is to provide longevity to worthy student projects that might otherwise be abandoned upon the developers’ graduation or upon completion of their thesis,” said Caspi. “With Access Map, TCAT was involved from start, but that is not necessarily the case with other projects that we foster.”

“It is great to partner with eScience to provide continuity for projects with high social value and enable more students to contribute to large scale civic data projects like these,” she continued. “Engaging a diversity of stakeholders is critical to building strong and sustainable access technology efforts.”

The UW eScience Institute receives major support from the Gordon and Betty Moore Foundation, the Alfred P. Sloan Foundation, the Washington Research Foundation, and the University of Washington. This summer’s Data Science for Social Good incubator session is sponsored in part by a grant from the MacArthur Foundation and an emerging campus-wide initiative called Urban@UW.