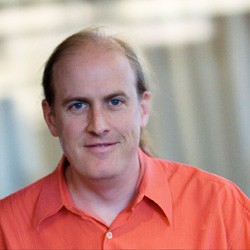 The latest issue of The Economist asks, “Electronics has already cut the data cord. Can it now cut the power cord as well?” Based in part on the work of CSE and EE professor Joshua Smith, the answer may soon be “yes.” Josh, who heads the UW Sensor Systems Lab, has developed a system for dynamic wireless charging of robots – and started a company, Wibotic, to commercialize the new technology. From the article:

“Drones may one day transform the way parcels are delivered, crops monitored and suspects apprehended. Those who talk up these possibilities, though, often neglect to mention the drawbacks of such robot aircraft – one of which is that most cannot fly for more than a quarter of an hour before they need to find a human being to swap their batteries for them or plug them into an electrical socket.

“Joshua Smith, a computer scientist at the University of Washington, in Seattle, hopes to change that. In May he started a company called Wibotic that plans to recharge drones (and also earthbound robots) without them having to establish an awkward physical connection with a plug.”

The article goes on to explain how the system Josh developed, which employs circuits that are tuned to the same resonant frequency, is a more efficient and flexible alternative to traditional induction systems that rely on simple transmitting and receiving coils. While the basic idea behind resonant induction is not new, Josh’s approach – which works over greater distances and can be tuned to different conditions – represents a significant step forward for wireless power transmission.