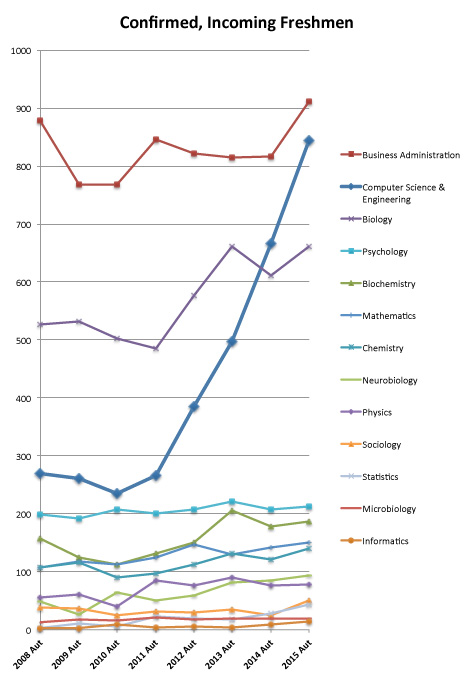 The UW Daily reports on exploding interest in Computer Science & Engineering on the part of UW applicants, incoming freshmen, and current students.

“The number of incoming freshmen choosing CSE as their intended major increased by approximately 900 people this year, with 3,679 applicants total. Of those applicants, 2,264 were admitted to the UW for the 2015-16 academic year, making CSE the second most popular major at UW behind business …

“While applications to the CSE major are at an all-time high, many students don’t realize their interest in the subject until much later. For example, 58 percent of women who are CSE majors didn’t intend to enter the program upon enrolling at the UW. This means freshman intent underestimates the actual demand the CSE program should expect.

“‘I definitely didn’t have experience beforehand,’ senior CSE major Stephanie Shi said. ‘I was very against [CSE] … but it turned out to be the complete opposite of what I expected.'”