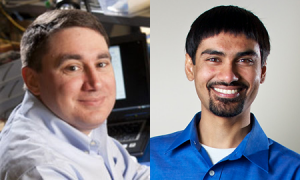 Research led by UW CSE and EE professors Matt Reynolds and Shwetak Patel that will enable “command by gesture” for smartphones is the topic of a special report on human-machine interfaces in the July issue of IEEE Signal Processing Magazine. The technology, known as SideSwipe, relies on a phone’s own wireless transmissions, using small antennae to read changes in the signal caused by different hand motions.

“Smartphones have become increasingly affordable and more widely used over the past several years. Yet smartphones and their applications are difficult to control in situations where the user lacks direct access to the touchscreen, such as while driving a car, cooking a meal, or exercising. While voice recognition technology promises a partial solution to the problem, such systems are far from foolproof and particularly unreliable in noisy environments.

“In an effort aimed at creating an alternate ‘hands off’ control technology, University of Washington researchers have created a new type of low-power wireless sensing technology that promises to allow users to ‘train’ their smartphones to recognize and respond to specific hand gestures….”

Read the full article here, and check out past CSE blog coverage of SideSwipe here and here.