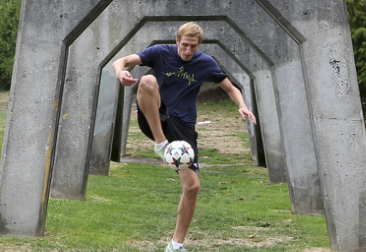 For anyone wondering if hard-working UW CSE students have lives outside of their academic studies: check out the great Seattle Times story on our very own Cory Black, computer science major and “freestyle magician.” Cory is competing in the Super Ball World Open Championships this week in Liberec, Czech Republic.

“After years playing soccer, Cory Black realized he enjoyed doing tricks with the ball more than the game itself.

“Fortunately for Black, 19, a Bellevue resident and former Newport High School soccer player, he wasn’t alone. A few years back, he discovered the fledgling sport of freestyle football, where competitors perform individualized, trick-laden routines with a soccer ball that never touches their hands or the ground….

” ‘No matter how many tricks you learn to do with a ball, you can’t really use all of it in games,’ Black said of transitioning to this offshoot of the sport, which he stumbled onto while seeking out new soccer-ball tricks on YouTube. ‘So, it made sense, given that this was what I was really good at.’ ”