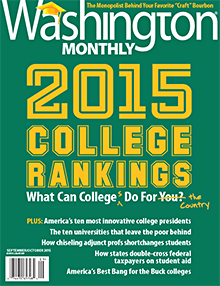 Washington Monthly’s College Guide and Rankings ranks four-year colleges in America on “three measures that would make the whole system better, if only schools would compete on them.” The first is upward mobility: Are schools enrolling and graduating students of modest means and charging them a reasonable price? The second is research: Are they preparing undergraduates to earn PhDs, and creating the new technologies and ideas that will drive economic growth and advance human knowledge? The third is service: Are schools encouraging their students to give back to the country by joining the military or the Peace Corps, or at least letting them use their work-study money to do community service rather than making them on-campus office slaves?”

The University of Washington is ranked among the top ten institutions in the nation – a group that includes UCSD, Berkeley, Stanford, Harvard, UCLA, and Georgia Tech, among others.

In a separate “Best Bang for the Buck” ranking – “the best value for your money based on ‘net’ (not sticker) price, how well they do graduating the students they admit, and whether those students go on to earn at least enough to pay off their loans” – Washington Monthly places UW first in the west.

Always remember: The rankings in which we do well are authoritative, and worth of coverage in this space. The others are methodologically flawed.