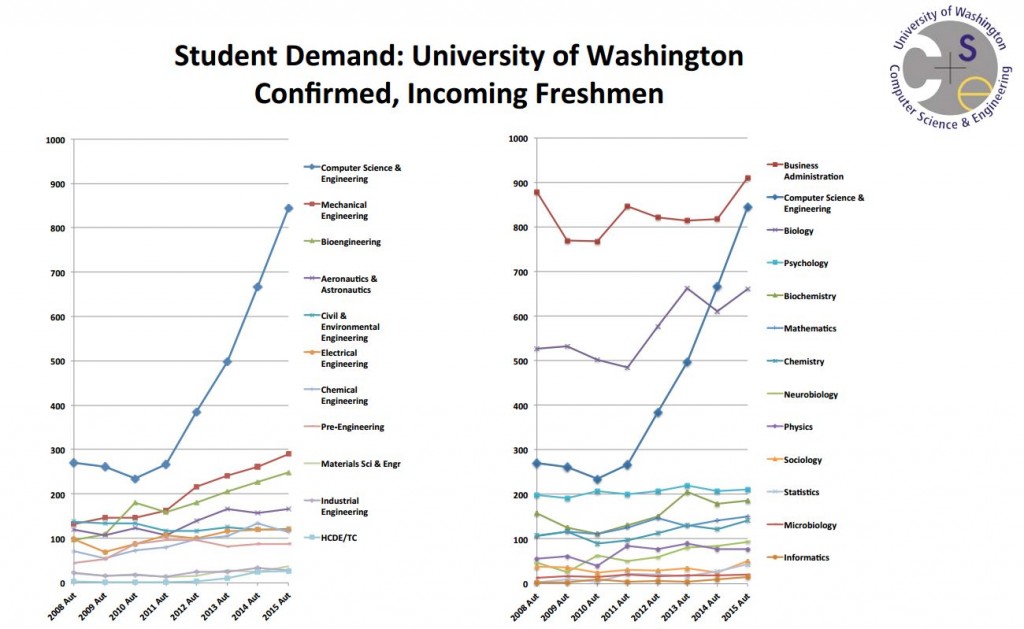 The Washington State Opportunity Scholarship (WSOS) was established by the legislature in 2011 to help students from low- and middle-income families pursue degrees in STEM and health care fields in the face of rapidly rising tuition. Microsoft and Boeing donated $25 million each to get the program off the ground in 2011. Yesterday, Steve and Connie Ballmer made an $11 million gift, and Microsoft added $10 million more. All private donations are matched 1:1 with state funds.

“Microsoft earlier this year kicked off a fundraising campaign for a new computer science building at UW with a $10 million donation. It also committed $40 million to the Global Innovation Exchange, a joint effort of the UW and Tsinghua University to create a graduate-level educational institution in Bellevue focused on technology, design, and entrepreneurship. [Microsoft Executive Vice President Brad] Smith has been instrumental in guiding Microsoft’s local contributions.

“[UW CSE’s Ed] Lazowska calls him ‘a saint.’ ‘As an individual, as a representative of Microsoft, and through the company, he has done many, many things in recent years that will make our region far stronger, now and for decades to come,’ he said.”

Xconomy also notes the shortage of capacity in computer science:

“‘The challenge is capacity, particularly in high quality programs at the bachelors level,’ said Susannah Malarkey, executive director of the Technology Alliance. ‘There is far more demand – from top students – than there is available space.

“Her organization’s latest benchmarking report (PDF), which tracks Washington’s performance against peers in areas including research capacity, investment, and education, found that in 2013, Washington ranked 39th out of the 50 states in science and engineering bachelor’s degree production per capita. (This, in part, may be why Seattle is experiencing so much angst about its current growth spurt and influx of new residents. Local technology giants and startup companies are recruiting people trained in computer science from around the world. What if more of them came from around the block?)

“At the University of Washington, home of the state’s premiere computer science program – indeed, one of the best in the country – demand for the computer science and engineering major from incoming freshmen this fall is second only to business administration, and not by much.”

Thank you, Steve and Connie Ballmer and Microsoft!

Published by Ed Lazowska on September 3, 2015