New wearable technology from UW tracks your carbon footprint, and so much more 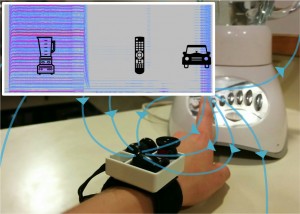 UW researchers have developed a prototype of a low-power, wearable system that can sense an individual’s interactions with different devices, from household appliances to motor vehicles. The new technology, MagnifiSense, analyzes near-field electromagnetic radiation from common components to measure usage in a variety of indoor and outdoor settings – and with a high degree of accuracy.

“In today’s smart home, technologies can track how much energy a particular appliance like a refrigerator or television or hair dryer is gobbling up. What they don’t typically show is which person in the house actually flicked the switch.

“A new wearable technology developed at the University of Washington called MagnifiSense can sense what devices and vehicles the user interacts with throughout the day, which can help track that individual’s carbon footprint, enable smart home applications or even assist with elder care….

“‘It’s another way to log what you’re interacting with so at the end of the day or month you can see how much energy you used,’ said Shwetak Patel, Washington Research Foundation Endowed Professor of Computer Science & Engineering and Electrical Engineering, who directs the UW Ubicomp Lab.

“‘Right now, we can know that lights are 20 percent of your energy use. With this, we divvy it up and say who consumed that energy,’ Patel said.”

The researchers plan to test MagnifiSense on more devices and to reduce their proof-of-concept so that the technology is small enough to be embedded in wrist-sized devices, such as a smartwatch.

Published by Kristin Osborne on September 8, 2015