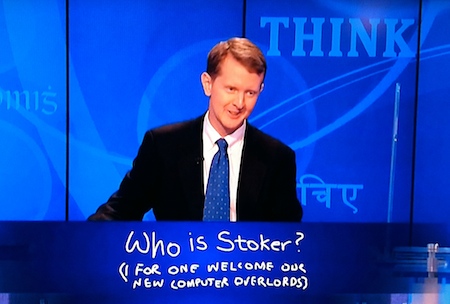 It’s man vs. machine when Ken Jennings, a former UW student and the most successful Jeopardy! player of all time, returns to campus to take on QANTA, a cutting-edge computer question-answering system, in a quiz bowl showdown. UW CSE is hosting the event at Kane Hall on the University of Washington’s Seattle campus on Friday, October 2.

This is not the first time Jennings has gone head-to-CPU with a computer: he came in second on Jeopardy! – which he previously won 74 times in a row – to I.B.M.’s Watson in 2011. But unlike Watson, which sees the entire trivia question at once, the QANTA system decides when it has enough information to answer a question, meaning it can take part in a tossup competition. Before the game gets underway, Professor Jordan Boyd-Graber of the University of Colorado at Boulder will share details on the machine learning research that led to QANTA and how students can get involved in the project.

The event starts at 4:00 pm and is open to the public. High school and university students are encouraged to attend. Please note: advance RSVP is required. More details on the event can be found here.

Published by Kristin Osborne on September 18, 2015