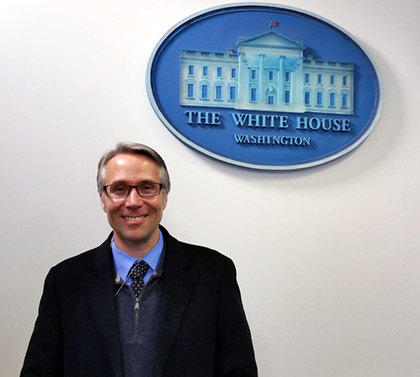 Mark has held leadership positions at Sony, Nintendo, Google and Ubisoft, to name only a few, and he was instrumental in the development of several gaming platforms. More recently, Mark put his considerable talents to work in service to the public, spending nearly two years as Senior Advisor for Digital Media at the White House Office of Science and Technology Policy (OSTP).

At OSTP, Mark focused on the Obama administration’s efforts to promote computer science literacy and gaming for education and engagement. Among his many contributions during his tenure in our nation’s capital were the development of speeches and events to promote computer science during Computer Science Education Week and staging the first-ever White House Education Game Jam in collaboration with the U.S. Department of Education. (And because once an engineer, always an engineer, Mark also did a little coding with his co-workers and helped build some Arduino-based dog-bots to liven up the White House Christmas decorations.)

In addition to contributing to Washington’s new teacher certification standards, Mark is collaborating with Intel on its tech diversity initiative and working to strengthen informal technology education opportunities for local students with a team of education technologists via the Seattle Learning Network. He also runs a weekly newsletter focused on informal learning through games, coding and making, which you can read here.

Great to have you back in this Washington, Mark! Thanks for all you have done and are doing to engage more K-12 students and teachers in computer science. And thanks to Stuart Reges for the tip – and for also contributing to this important effort!

Published by Kristin Osborne on September 28, 2015