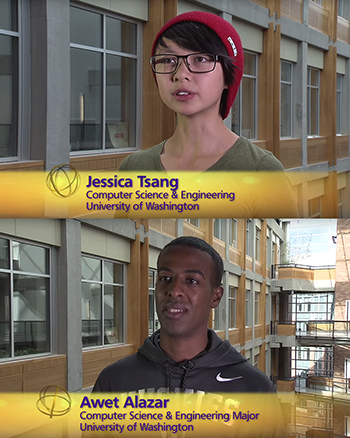 “UW 360,” a magazine-style television show produced by UW TV that profiles people and programs that define the university, recently aired a segment on the need to significantly expand UW Computer Science & Engineering. The segment, which includes interviews with undergraduate students Awet Alazar and Jessica Tsang, professor Ed Lazowska, and Microsoft recruiter Becky Tucker, highlights the growing demand on the part of students and employers for UW CSE.

As the segment explains, “Awet and Jessica are part of a UW program that is in extremely high demand. With each passing year, admission becomes increasingly competitive. That makes sense when you consider the program contributes by far the most computer science graduates to the workforce in the state of Washington.”

And Becky from Microsoft, where both students recently had internships, told UWTV, “Students we hire here from UW CSE are top quality candidates….What’s nice about these students is that they are original, very individual thinkers [and] great contributors.”

Watch the video, which makes a great case for expanding UW CSE (and does so in under three minutes), here.

Published by Kristin Osborne on September 29, 2015