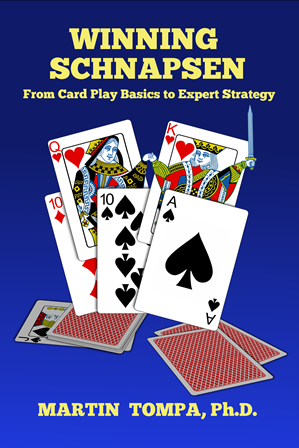 When it comes to Schnapsen – the national card game of Austria – UW CSE professor Martin Tompa’s got game. And now the rest of us can, too, with the help of his new book, Winning Schnapsen. Like the title suggests, it is the definitive guide to mastering the 300+ year-old game that enjoys a popular following in continental Europe.

Schnapsen is a two-person card game that has some similarities with another well-known game, Bridge. It is the perfect pastime for computer scientists, and Martin’s winning strategies employ a number of concepts that will sound familiar, such as expected value and other aspects of probability theory. In fact, Martin uses Schnapsen in his CSE 312 course on the foundations of computing – which inspired a group of students who took the course to establish a UW Schnapsen club.

Martin’s interest in Schnapsen was rekindled in 2012, when he worked with two former UW CSE Ph.D. students, Dick Garner and Jeff Scofield, to create an iPhone app against which users could play the game.

“The fact that their app beat me pretty consistently is what got me interested in figuring out how to play as well as it does,” Martin explained.

Now, thanks to Martin, everyone can win at Schnapsen. Learn more here.