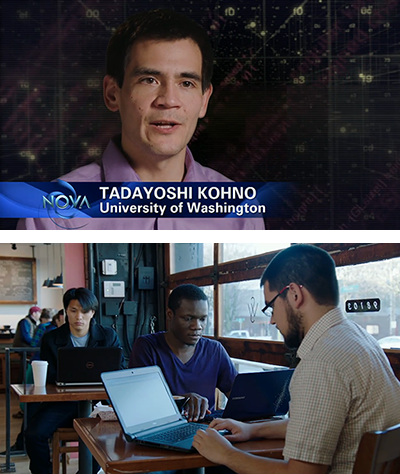 UW CSE professor and cybersecurity expert Yoshi Kohno and two teams of graduate students from the Security and Privacy Research Lab were featured in this week’s episode of NOVA, “CyberWar Threat,” that aired on PBS.

The first part of the segment revisited the now-famous car hacking research done in conjunction with UCSD. Yoshi and his team – which included former CSE Ph.D. students Karl Koscher, now a postdoc at UCSD, and Franzi Roesner, now a professor at UW CSE – remotely take over the brakes of a car in a dramatic illustration of how vulnerable embedded systems in automobiles are to attack.

In the second segment, EE Ph.D. student Tope Oluwafemi and CSE bachelor’s student Tariq Yusuf (both now alumni) required nothing more than a laptop and their own wireless hotspot in order to hack into CSE Ph.D. student Alex Takakuwa’s laptop as he sat in a local coffee shop. By directing his laptop to an “evil twin” network rather than the coffee shop’s own WiFi, the hackers were able to discover his home security login, and subsequently figure out where he lives. NOVA follows Tope and Tariq as they later break into Alex’s house, demonstrating the potential vulnerability of home automation systems that enable remote control over the internet.