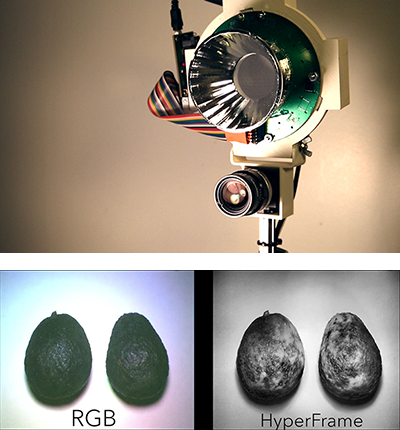 UW faculty and students worked with Microsoft Research on the development of a new, affordable hyperspectral camera called HyperCam that is capable of capturing details unseen by the naked eye – including those beneath the surface of an object. The system, which has many potential applications, was created by UW CSE+EE professor Shwetak Patel; UW CSE professor Gaetano Borriello; CSE graduate students Mayank Goel, Eric Whitmire and Alex Mariakakis; and Scott Saponas, Neel Joshi, Dan Morris, Brian Guenter and Marcel Gavriliu of Microsoft Research.

“Hyperspectral imaging is used today in everything from satellite imaging and energy monitoring to infrastructure and food safety inspections, but the technology’s high cost has limited its use to industrial or commercial purposes. The UW and Microsoft Research team wanted to see if they could make a relatively simple and affordable hyperspectral camera for consumer uses….

“HyperCam, which uses the visible and near-infrared parts of the electromagnetic spectrum, illuminates a scene with 17 different wavelengths and generates an image for each.

“One challenge in hyperspectral imaging is sorting through the sheer volume of frames produced. The UW software analyzes the images and finds ones that are most different from what the naked eye sees, essentially zeroing in on ones that the user is likely to find most revealing.”

While existing hyperspectral imaging systems can cost tens of thousands of dollars, HyperCam comes in at around $800 – and could cost as little as $50 to incorporate into a mobile phone camera. The team envisions several potential uses for HyperCam, including food quality monitoring, biometric security, gaming, and health sensing. In one demonstration, the researchers were able to predict the ripeness of fruit with 94 percent accuracy using hyperspectral images of the flesh beneath the skin. In another, HyperCam was shown to be able to differentiate between different users’ hands with 99 percent accuracy.

According to Patel, “‘It’s not there yet, but the way this hardware was built you can probably imagine putting it in a mobile phone…With this kind of camera, you could go to the grocery store and know what produce to pick by looking underneath the skin and seeing if there’s anything wrong inside. It’s like having a food safety app in your pocket.”

Read the full media release and watch a video demonstration here, and read the research paper here. Read about HyperCam in GeekWire here.