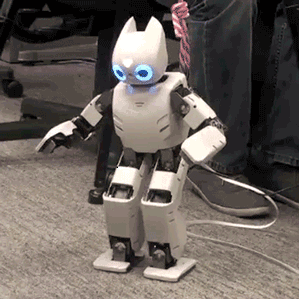 MIT Technology Review recently published a nice article about robotics research led by UW CSE Ph.D. alum Igor Mordatch, who worked with UW CSE professor Emo Todorov in the Movement Control Laboratory before taking up a postdoc position with Pieter Abbeel at UC Berkeley. Igor is the lead researcher on a project in which Darwin, a humanoid robot with simulated neural networks, learns how to move by “imagining” how to do it, and to adjust its movements based on real-world conditions.

“Like many toddlers, Darwin sometimes looks a bit unsteady on its feet. But with each clumsy motion, the humanoid robot is demonstrating an important new way for androids to deal with challenging or unfamiliar environments. The robot learns to perform a new task by using a process somewhat similar to the neurological processes that underpin childhood learning….

“‘It practices in simulation for about an hour,’ says Igor Mordatch, a postdoctoral researcher at UC Berkeley who carried out the study. ‘Then at runtime it’s learning on the fly how not to slip.'”

The article also quotes UW CSE professor Dieter Fox, who is enthusiastic about the potential for neural network learning in robotics.

“‘I’m very excited about this whole research direction,’ Fox says. ‘The problem is always if you want to act in the real world. Models are imperfect. Where machine learning, and especially deep learning comes in, is learning from the real-world interactions of the system.'”

Published by Kristin Osborne on November 13, 2015