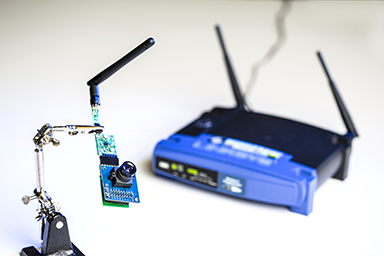 Researchers from UW CSE and EE announced in June that they had developed Power Over WiFi, “PoWiFi” for short, to harvest energy from Wi-Fi routers to wirelessly power devices. The technology, which has appeared in MIT Technology Review, Wired, BBC News, and several other media outlets, was chosen this week as one of Popular Science’s “Best of What’s New 2015” – a list of the top 100 innovations that the magazine believes will shape the future and change the world.

“The technology made headlines earlier this year when researchers published an online paper showing how they harvested energy from Wi-Fi signals to power a simple temperature sensor, a low-resolution grayscale camera and a charger for a Jawbone activity tracking bracelet….

“‘In the future, PoWiFi could leverage technology power scaling to further improve the efficiency of the system to enable operation at larger distances and power numerous more sensors and applications,’ said co-author Shyam Gollakota, assistant professor of computer science and engineering.”

Read the Popular Science article here, and the UW media release here. Check out our previous blog coverage of the project here and here.

Congratulations to the entire PoWiFi team!

Published by Kristin Osborne on November 18, 2015