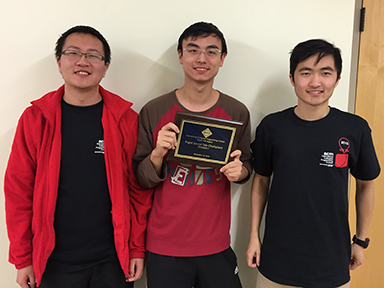 Five teams of UW CSE students competed at the Pacific Northwest regional for the ACM’s annual International Collegiate Programming Contest (ICPC) last weekend. Once again, our students made a strong showing, sweeping the top five spots at the Puget Sound competition site and holding their own against some formidable opponents from other top institutions in the broader regional contest. Twelve CSE undergraduates and three graduate students participated.

Puget Sound was one of six sites that determined which teams from the Northwest region – which includes Alaska, British Columbia, Washington, Oregon, northern and central California, western Nevada and Hawaii – will move on to compete in the world finals next May.

The regional competition is fierce, including teams from UW CSE, Stanford, UC Berkeley and a number of other schools. Two teams of CSE undergradate students – Orz and Eternal Flame – placed in the top 10 overall, and all five teams placed in the top 20. (A total of seventy teams competed in UW CSE’s division.) Everyone made their coach, UW CSE Ph.D. student Daniel Epstein, proud:

Way to go, everyone!

Published by Kristin Osborne on November 19, 2015