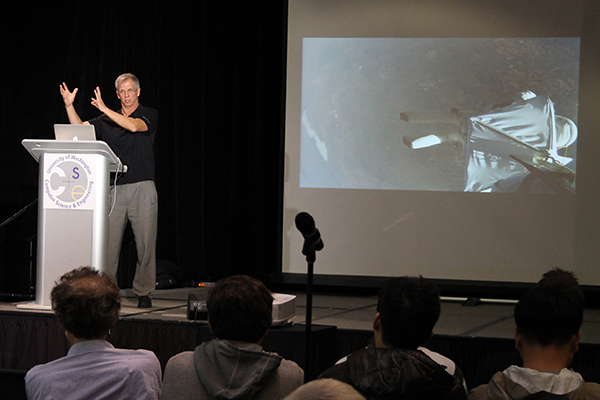 Students, faculty and guests packed the Allen Center atrium today to hear former Google executive Alan Eustace tell the exciting story of his world record-setting space jump and the technical challenges he had to overcome to, in his words, “scuba dive in the stratosphere,” as part of UW CSE’s Distinguished Lecturer Series.

Eustace broke the altitude record and traveled faster than the speed of sound, reaching 822 miles per hour at one stage of his jump from a balloon launched from Roswell, New Mexico. During his presentation at UW CSE, Eustace described how he and his team emphasized “technology over ability,” developing a nearly indestructible, 400+ pound space suit with novel life support and parachute systems built mostly with off-the-shelf components. He also discussed the challenges associated with safely launching a helium balloon roughly the size of a football stadium into space and bringing it back down to earth without incident.

If you missed the lecture, checked out GeekWire’s excellent write-up here, and read more about Eustace’s incredible feat in the New York Times here.

Next up in the Distinguished Lecturer Series: join us this Thursday for a presentation by Jeannette Wing, Corporate Vice President at Microsoft, for “Research at Microsoft: Looking Beyond the Horizon.” Find more details here.

Many thanks to Alan for sharing his amazing story with us!