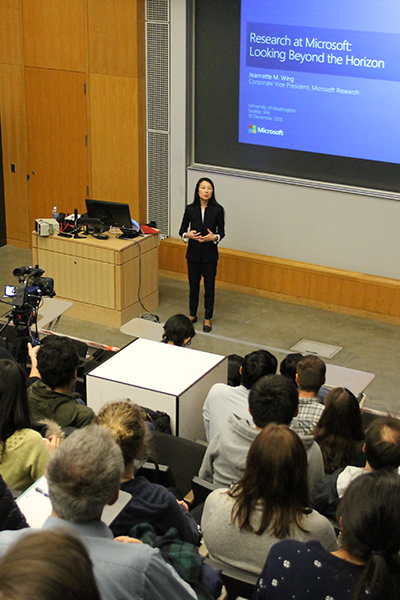 “Think bolder, aim higher.” That’s the message that Jeannette Wing delivered to the world-class scientists and technologists in Microsoft Research, and the message she delivered to a packed lecture hall during the latest installment of UW CSE’s Distinguished Lecturer Series.

With more than 1,000 researchers around the globe, Wing likes to describe Microsoft Research as “the largest computer science department in the universe.” During her presentation, Wing talked about MSR’s impact on science, on technology and on society, and described a handful of projects that are sure to affect all three in the coming years.

The first deals with integrative intelligence in the areas of vision and language. A team at MSR has developed a system for captioning images that goes beyond object segmentation and classification to reasoning and inference, and that exhibits evidence of “transfer learning” – that is, a model trained on one task shows itself to be good at another task. The second project is focused on developing safe cyber-physical systems (specifically drones). But the research team has more than the safety of drones in mind: its work could impact the safety of broad communities, using drones to fight the spread of infectious diseases. Finally, Wing talked about the large biological computation group at MSR. By applying computer science to biology, Wing noted, researchers are able to “discover new biology.” Researchers are taking this approach to better understand and program biological systems.

There is one more Distinguished Lecture left in 2015! Join us next Thursday, December 17th, when John Markoff of The New York Times joins us to talk about his new book, Machines of Loving Grace: The Quest for Common Ground Between Humans and Robots. More details here.

Thanks to Jeannette for her leadership in the field of computer science and for sharing MSR’s great work with our faculty and students!

Published by Kristin Osborne on December 10, 2015