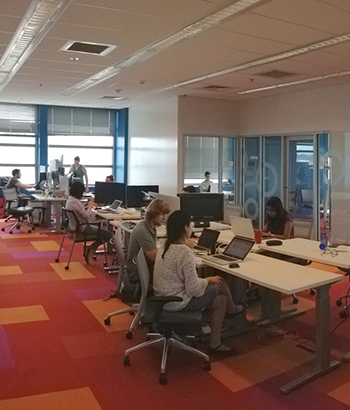 The WRF Data Science Studio on the UW Seattle campus

UW CSE has partnered with the iSchool and the departments of Applied Mathematics, Biostatistics, Human Centered Design & Engineering, and Statistics – under the auspices of the eScience Institute – on the creation of a master’s degree program in the growing field of data science. The new program, which will begin in fall 2016, was developed with input from industry leaders and will combine statistical modeling, machine learning, software engineering, data management and visualization, and user interface design.

“‘This new master’s program was designed not only by six leading UW departments, but also with direct input from top data science hiring managers in Seattle and nationwide,’ said Bill Howe, associate director and senior data science fellow at the UW eScience Institute and chair of the UW Data Science Master’s Development Committee. ‘The level of technical expertise from both industry and academia that went into designing this program makes it unique in the country….’

“‘UW has elite programs — among the best in the nation — in the core fields on which data science relies,’ said Ed Lazowska, Bill & Melinda Gates chair for the UW Department of Computer Science & Engineering and founding director and senior data science fellow at the UW eScience Institute. ‘This new professional master’s program builds on the UW’s leadership in data science research and education and solidifies the position of Seattle and the Pacific Northwest as a national hub for professional data scientists.'”

The Master of Science in Data Science is designed for working professionals, who will have the option to study full-or part-time. Classes will be held in the evenings on the UW Seattle campus.

Read the full media release here, and learn more about the program here.

Published by Kristin Osborne on December 14, 2015