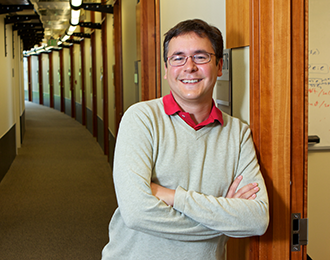 Speaking on “The Record,” Ceze explained what makes DNA attractive to computer scientists as a storage vehicle, pointing out that “nature evolved it and tested it for us.” He also noted that, as DNA is unlikely to become obsolete any time soon (unlike those old floppy disks sitting in your desk drawer), it is the ideal storage technology for archiving all of human knowledge for posterity.

“As long as there is DNA-based life on earth, there will be DNA,” Ceze said.

When Radke asked what interested him personally in the project, Ceze cited the importance of preserving history – and learning from it.

“Think of it as a data trust fund…The same way that archaeology learns about the past today, we could enable future digital archaeologists.”

Listen to the full interview here, and read the New York Times article on the DNA data storage project here. It’s just one example of many wonderful partnerships between UW and Microsoft Research.