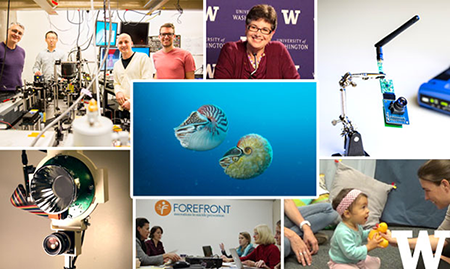 We love data here at UW CSE – especially when it makes us look good. And we’re looking pretty good as 2015 comes to a close: according to our friends in UW’s Office of News & Information, UW CSE research inspired three of their 10 most viewed news stories over the past year. So join us in raising a toast to the amazing year that was – and to our amazing faculty and students!

Here are the ways UW CSE has been making headlines, according to the “Best of UW,” 2015 edition:

A team of UW CSE and EE researchers earned accolades for developing a novel way to power devices by tapping into a readily available, but largely ignored, energy source: the signals emitted by your WiFi router. Popular Science included the project affectionately known as “PoWiFi” in its annual “Best of What’s New” awards in November after researchers demonstrated its ability to power a small camera and temperature sensor without degrading the quality of the Wi-Fi signal. (UW CSE professor Shyam Gollakota; CSE and EE professor Josh Smith, EE graduate students Vamsi Talla, Bryce Kellogg and Saman Naderiparizi; and former CSE postdoc Ben Ransford)

In October, members of the Ubiquitous Computing Lab and Microsoft Research revealed HyperCam, an affordable hyperspectral imaging camera that can capture what lies beneath the surface of an object, such as the veins in your hand or the flesh of an avocado. The technology could be used for a host of health and safety and consumer applications, from food quality monitoring, to biometric security, to gaming. (UW CSE and EE professor Shwetak Patel; CSE professor Gaetano Borriello; CSE graduate students Mayank Goel, Eric Whitmire and Alex Mariakakis; and Scott Saponas, Neel Joshi, Dan Morris, Brian Guenter and Marcel Gavriliu of Microsoft Research)

UW CSE and the UW Medicine Sleep Center collaborated on the development of an affordable, contactless mobile phone app that is capable of detecting sleep apnea, a respiratory disorder that affects one in 13 Americans, without requiring patients to leave their bedrooms. In 300 hours of testing, ApneaApp was shown to be 95 to 99 percent accurate in tracking respiratory events compared to the more costly – and much less convenient – intensive polysomnography test. (UW CSE professor Shyam Gollakota; CSE graduate student Rajalakshmi Nandakumar; and Dr. Nathaniel Watson of the UW Medicine Sleep Center)

Published by Kristin Osborne on December 31, 2015