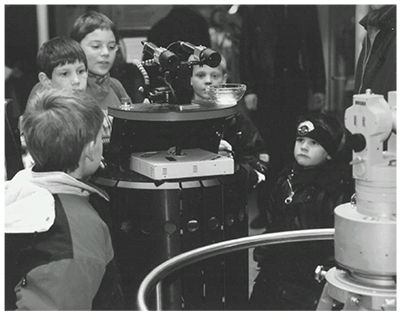 A paper co-authored by UW CSE professor Dieter Fox in his graduate student days was one of two papers selected this year for special recognition by the Association for the Advancement of Artificial Intelligence (AAAI) with its Classic Paper Award, which recognizes papers that have been the most influential in the field. AAAI will show Fox and his colleagues the love during the opening ceremony of its 2016 conference on February 14th in Phoenix, Arizona.

The winning paper, “The Interactive Museum Tour-Guide Robot,” was originally presented at the 15th National Conference on Artificial Intelligence held in 1998 in Madison, Wisconsin. In it, the research team described RHINO, an autonomous, interactive robot that was designed to entertain and assist the public in highly dynamic environments. 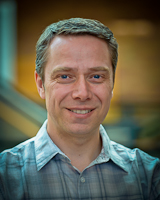 The team focused on two priorities when building RHINO: achieving safe and reliable navigation at high speeds, and providing an intuitive and appealing user experience. Fox and his colleagues incorporated a number of innovations in localization, mapping, collision avoidance, and planning into RHINO’s software to enable it to operate under challenging conditions without having to modify the environment to aid its navigation. Because RHINO’s main purpose was to interact with people, they also placed special emphasis on user interaction, taking care to make the robot interface intuitive and user-friendly for non-experts—a relatively new concept in robotics research at the time. The team then put RHINO through its paces over the course of six days in the crowded Deutsches Museum Bonn in Germany. In addition to visitors interacting with RHINO in person, people around the world had the ability to control RHINO remotely via the Web.

In a related article on the RHINO experiment, the team noted that while most people found the robot entertaining, some took the entertainment too far and attempted to “break the system.” (In at least one case, someone who must not have received enough affection as a child attempted to lead RHINO dangerously close to a stairwell.) Happily, such attempts failed, and the robot was able to fulfill a total of 2,400 requests to tour the museum, either in-person or online—a whopping 99.75% success rate.

Fox’s Ph.D. research was a significant contribution to the paper, which was co-authored by Fox’s advisor, Armin Cremers, and colleagues at the University of Bonn, Aachen University of Technology, and Carnegie Mellon University. Their RHINO experiment pointed to the future of robotics with its focus on adaptability and human-computer interaction. It was a truly astounding result at the time, for which the team deserves this accolade from the AAAI today.

Published by Kristin Osborne on January 21, 2016