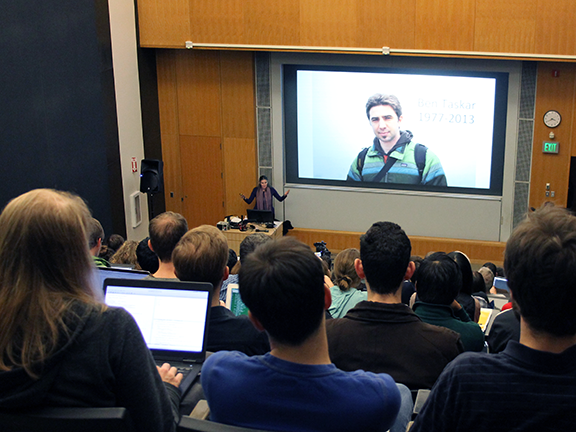 UW CSE professor Ben Taskar passed away tragically, in his 30’s, in 2013, of sudden and severe heart failure.

UW CSE has commemorated Ben in a number of ways, including the establishment of the Taskar Center for Accessible Technology, and of the annual Ben Taskar Memorial Lecture.

The event began with remarks honoring Ben by UW CSE professor Carlos Guestrin – like Ben, a Daphne Koller Ph.D. alumnus and machine learning star – and a overview of the Taskar Center by its director (and Ben’s wife) Anat Caspi.

Daphne followed her own remarks honoring Ben with an inspirational talk describing the mission and impact of Coursera.

“Anyone, anywhere can transform their life by accessing the world’s best learning experience.”

That is the vision of Coursera, which has transformed access to higher education through a robust platform for delivering massive open online courses (MOOCs) to people around the world.

Daphne talked about the growth of Coursera as an online learning platform and the impact that it has had on learners and instructors. She shared some impressive numbers: four years ago, the first online courses offered by Stanford reached around 100,000 learners. Today, Coursera has surpassed 17 million registered learners around the globe, with more than 130 institutions and 1,000 instructors offering classes on the platform (including the UW, which was an early partner). And it is opening up pathways to learning for people who would not otherwise have access to quality higher education: 40% of active learners on Coursera are from emerging economies.

The data tell a compelling story on their own, but Daphne also shared personal anecdotes that illustrate the tremendous impact that Coursera and MOOCs in general have had on people’s lives around the globe—real people who gained access to a world of learning they otherwise would not have had.

In keeping with the day’s theme of accessibility, Daphne shared the touching story of Jerry Vickers. Vickers was diagnosed with ALS, for which the life expectancy is around 18 months. After losing his ability to move his limbs, Vickers spent what precious time remained of his life studying programming and a variety of other subjects on Coursera using a tablet controlled with his eye movements. From the Indian baker who took business classes so she could save her female friends from being sold into servitude, to the professor whose course about human trafficking enabled victims to pursue restitution for their own tragic experiences with it, Daphne’s stories revealed what a powerful—and empowering—tool MOOCs have become for both learners and instructors.

The standing-room-only lecture capped off a day of workshops and events focused on accessibility to mark the first anniversary of UW CSE’s Taskar Center for Accessible Technology. Today’s program was a terrific way to honor Ben’s memory, and a terrific celebration of the work being done at the Taskar Center. Many thanks to Daphne for sharing the Coursera story with us.

Published by Kristin Osborne on January 21, 2016