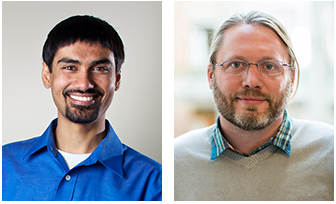 The White House Office of Science and Technology Policy announced today that UW CSE and EE professor Shwetak Patel and UW CSE professor Luke Zettlemoyer have been selected to receive a Presidential Early Career Award for Scientists and Engineers (PECASE). The award, which is the highest honor the U.S. government bestows upon scientists and engineers in the early stage of their careers, is designed to support promising young researchers who show exceptional potential to advance the frontiers of scientific knowledge in the 21st century and demonstrate a commitment to community service.

Patel and Zettlemoyer are among 106 scientists and engineers selected from across the country to receive this honor. From the White House press release:

“‘These early-career scientists are leading the way in our efforts to confront and understand challenges from climate change to our health and wellness,’ President Obama said. ‘We congratulate these accomplished individuals and encourage them to continue to serve as an example of the incredible promise and ingenuity of the American people….’

Patel, who directs the UW’s UbiComp Lab and is a recognized expert in sensor systems research, was nominated for a PECASE by the National Science Foundation “for inventing low-cost, easy-to-deploy sensor systems that leverage existing infrastructures to enable users to track household energy consumption and make the buildings we live in more responsive to our needs.”

Zettlemoyer, a member of UW CSE’s world-class Natural Language Processing group, was nominated by the Department of Defense “for his outstanding research accomplishments in computational semantics, in particular for innovative new machine learning approaches for problems in natural language understanding.”

Patel and Zettlemoyer will be formally recognized at a White House ceremony in the spring. They join some pretty select company, including previous PECASE recipients Tom Anderson and Carlos Guestrin on the UW CSE faculty.

Published by Kristin Osborne on February 18, 2016