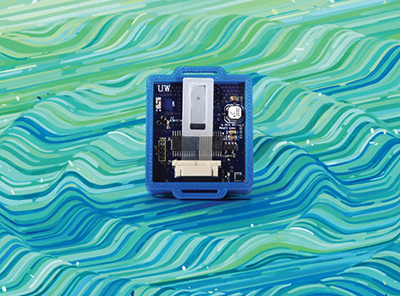 “Even the smallest Internet-connected devices typically need a battery or power cord. Not for much longer. Technology that lets gadgets work and communicate using only energy harvested from nearby TV, radio, cell-phone, or Wi-Fi signals is headed toward commercialization. The University of Washington researchers who developed the technique have demonstrated Internet-connected temperature and motion sensors, and even a camera, powered that way….

“One version of the University of Washington technology, dubbed passive Wi-Fi, is being commercialized through a spin-off company, Jeeva Wireless. It lets battery-free gadgets connect with conventional devices such as computers and smartphones by backscattering Wi-Fi signals. In tests, prototype passive Wi-Fi devices have beamed data as far as 100 feet and made connections through walls.”

A UW News release explains how the team decoupled the digital and analog operations involved in transmitting the signals, assigning the power-intensive analog functions to a single device plugged into a wall. Passive sensors can then produce Wi-Fi packets using very little energy by reflecting and absorbing the signal using a digital switch—enabling communication with any Wi-Fi-enabled device straight out of the box.

“‘We wanted to see if we could achieve Wi-Fi transmissions using almost no power at all,’ said co-author Shyam Gollakota…’That’s basically what Passive Wi-Fi delivers. We can get Wi-Fi for 10,000 times less power than the best thing that’s out there….’

“Aside from saving battery life on today’s devices, wireless communication that uses almost no power will help enable an ‘Internet of Things’ reality where household devices and wearable sensors can communicate using Wi-Fi without worrying about power.”

The team will present its research paper on Passive Wi-Fi at the NSDI 2016 conference next month.

Published by Kristin Osborne on February 23, 2016