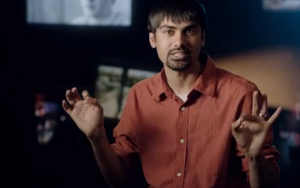 Last night the new documentary The Human Face of Big Data premiered on PBS. UW CSE and EE professor Shwetak Patel contributed his expertise and insights to the film, which examines how the vast amounts of data collected in our increasingly connected world is changing the way we live and shaping our future. As big data’s big night approached, Patel and executive producer Rick Smolan joined Jeremy Hobson, host of NPR’s “Here & Now,” to talk about the anticipated benefits and potential pitfalls associated with the age of big data.

One of the benefits Patel highlighted was health care. In contrast to the traditional visit to a doctor’s office, where a patient’s vitals are taken and perhaps more tests are ordered to come up with a diagnosis, “Think about what you could do if you could collect physiological information throughout the day, and in non-invasive ways,” he suggested, “and then using artificial intelligence and machine learning to gain some interesting insights about what may happen in the future…to diagnose and predict disease before it’s too late.”

Another topic discussed by the trio was the need for transparency around what data is being collected and how it is being used. Patel agreed that it is a conversation we need to have, and that technology could help broker that. “One of the issues is that people really don’t know what’s possible with the data and what’s actually happening behind the scenes,” he said.

Although on the one hand, many people may react negatively to the concept of big data, Patel noted that they are “voting with their feet” by using the apps and services. “At the end of the day, it’s really the data analytics that’s enabled this whole technology revolution and this new paradigm,” he said.

Listen to the full interview on the NPR website, and watch clips from the documentary online courtesy of PBS. Also check out related coverage on GeekWire and the original book on which the film is based.

Published by Kristin Osborne on February 25, 2016