UW CSE, Microsoft Research bring together the brightest minds in PLSE research in the Pacific Northwest 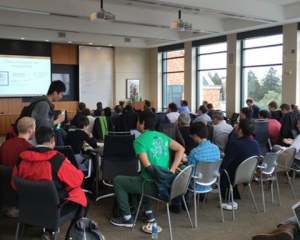 A full house at the Pacific Northwest PLSE meeting

The Pacific Northwest is known to be a hotbed of programming language and software engineering (PLSE) innovation. Now, the brightest local minds in PLSE research have a forum in which to share their latest work and discuss emerging topics in the field with their colleagues from throughout the region, thanks to the efforts of professors Ras Bodik and Alvin Cheung of UW CSE’s world-class PLSE group and Rishabh Singh of the RiSE (Research in Software Engineering) group at Microsoft Research. Bodik, Cheung and Singh organized the inaugural Pacific Northwest PLSE Meeting held at the UW’s Paul G. Allen Center for Computer Science & Engineering last week—assembling a program that was chock full of new and noteworthy developments in PLSE research.

The agenda included sessions on tools and synthesis, chaired by Rishabh Singh; new languages, chaired by UW CSE professor Emina Torlak; and analysis and formal methods, chaired by Ben Zorn of Microsoft Research. UW CSE professor Zach Tatlock chaired the final session of the day, which was devoted to a series of lightning talks that illustrated PLSE’s expanding impact on fields outside of core computer science. 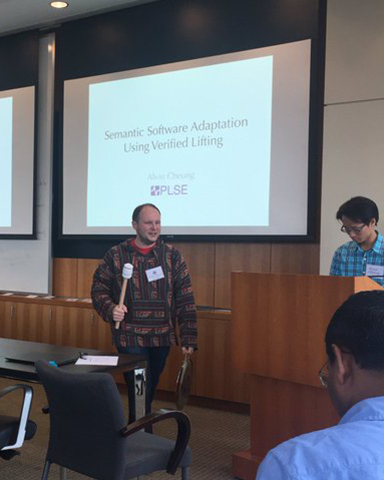 In his presentation to conclude the program, Ben Zorn highlighted how PLSE research is becoming more relevant to people’s everyday existence. Given the proliferation of computers in our homes, in our cars and on our bodies—and the increasingly sophisticated software required for their operation—he noted that people’s lives depend upon the work of the PLSE research community.

“The software in these objects will be written in the next five years, but will have implications for the next 50 years,” Zorn said, issuing a call to action to his colleagues to focus on developing the languages, tools and processes to ensure their safety.

Other highlights of the day included technical talks by UW CSE Ph.D. student Calvin Loncaric and professors Alvin Cheung, Michael Ernst and Xi Wang; a presentation by Kartik Chandra, a high school student who has been working with Ras Bodik, on the use of symbolic execution to verify typecheckers; and a demonstration by Microsoft Research’s Rob DeLine of a new programming language for data scientists engaged in real-time data analysis. 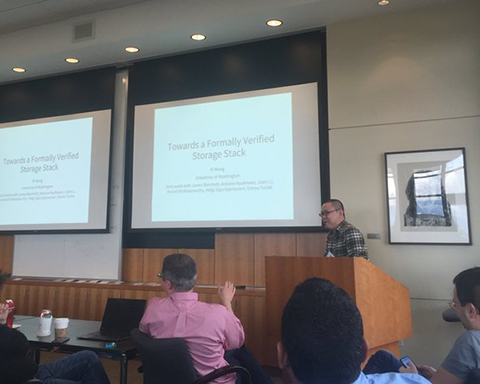 Xi Wang talks about his research

Thanks to everyone who helped make our inaugural event a great success!