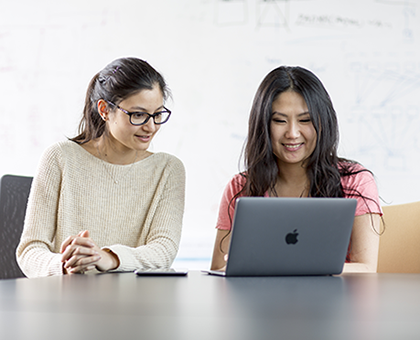 Women historically have played a significant role in computer science. While the field has gone backward in recent decades when it comes to gender diversity, UW CSE has made a concerted effort to buck that trend and attracted national attention as a result.

Seattle online journal Crosscut recently caught up with UW CSE B.S./M.S. student Sonja Khan and Ph.D. student Irene Zhang to find out what makes this program so special. Their experiences reinforce the notion that, when it comes to increasing diversity in computing, a welcoming and supportive culture is key.

“Women’s role in the computer revolution is often glazed over. There’s Ada Lovelace, the mathematician sometimes called the ‘world’s first computer programmer’, who sketched out the possibilities of computers way back in the 1800s. In 1945, one of the world’s first electronic general-purpose computers was built, with six female mathematicians creating its programs. By the early ‘80s, personal digital computers were taking off, and computer science was a major in universities. The number of women earning bachelor’s degrees in computing hovered around 40 percent.

“But around 1985, the number plummeted. Today, only about 18 percent of computer science bachelor’s degrees are earned by women. Women once held a prominent role in shaping the field’s future. In large part, that’s no longer the case….

“What can reverse the trend, and bring more women into the field again? It’s a question that companies and universities across the U.S. are asking. And the University of Washington’s Department of Computer Science and Engineering (UW CSE) may have found a method that works.”