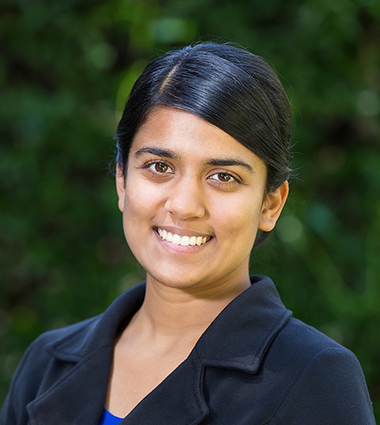 UW senior Krittika D’Silva has been named a 2016 Gates Cambridge Scholar, one of the most prestigious international scholarships in the world. D’Silva, who will graduate from the UW this June with a degree in computer engineering and bioengineering, will pursue her Ph.D. in computer science at the University of Cambridge’s Jesus College starting in the fall.

D’Silva currently works with UW CSE professor Luis Ceze in the Molecular Information Systems Lab, where she is assisting the development of a novel DNA-based system for long-term data storage. Previously, she collaborated with the late CSE professor Gaetano Borriello and CSE Ph.D. alum Nicki Dell on the development of mobile health apps for use in low-resource settings in the Information & Communications Technology for Development (ICTD) Lab. D’Silva also spent more than two years as a researcher in the Department of Bioengineering, where she focused on improving the design of prosthetic devices used by people living with lower limb amputations.

The Gates Cambridge scholarship program supports academically outstanding students who have demonstrated strong leadership and a commitment to improving the lives of others. D’Silva is one of 55 scholars selected from a global pool of more than 3,700 highly competitive applicants. Check out her new Gates Cambridge scholar profile here.

Published by Kristin Osborne on April 7, 2016